A timeline of autism classifications

Autism is not a static concept, nor is the way that autism is perceived static. As the concept of autism evolved over the years along with—and informed by—our increasing understanding of the condition and its various manifestations, naturally the autism classifications—the terminology used to refer to the condition(s)—evolved as well.

Also, there may or may not be a visualization of the timeline at the end of this post…

The British physician John Langdon Down (1828–1896) described savant syndrome in his 1887 lecture,[1]Review of: On some of the mental affections of childhood and youth (Churchill, 1887) but also described a subgroup of children with “mental retardation” that didn’t show many of the hallmarks of more typical mental retardation, and called it developmental retardation. He described what seem to be cases of both early-onset and late-onset (regressive) autism, which today would be considered ASD level 3.[2]Dr. Down and “developmental disorders” (Treffert, 2006)

The word autism (Greek autos, meaning self) was first used by Swiss psychiatrist and eugenicist Eugen Bleuler (1857–1939) to describe schizophrenic patients who were especially withdrawn into themselves. Bleuler describes in his paper entitled Die prognose der Dementia praecox (The prognosis of dementia praecox) from 1908:

The autistic withdrawal of the patient to his fantasies,
against which any influence from outside becomes an intolerable disturbance. This seems to be the most important factor.
In severe cases it by itself can produce negativism.[4]Eugen Bleuler’s Concepts of Psychopathology (Kuhn, 2004)

In a footnote of his 1910 paper entitled Zur Theorie des schizophrenen Negativismus (The Theory of Schizophrenic Negativism), Bleuler wrote:

What I understand as autism is about the same as
Freud’s autoerotism, but I prefer to avoid using this expression, because everybody who does not know Freud’s writings
exactly misunderstands it.[5]Eugen Bleuler’s Concepts of Psychopathology (Kuhn, 2004)

Not a lot of people have heard of her work,[7]Tribute to Grunya Efimovna Sukhareva, the woman who first described infantile autism (Posar & Visconti, 2017) but what she described was in fact indistinguishable from the condition that Hans Asperger described 18 years later.

He described these children as having:

A powerful desire for aloneness, and an
obsessive insistence on persistent sameness.[9]Autistic Disturbances of Affective Contact (Kanner, 1943)

All were much obsessed by a desire for absolute sameness of routine and were much upset by change of any kind. It is noted that most of the children came from families of academic distinction. Nine of the 20 families were listed either in Who’s Who in America or American Men of Science or in both.

Whether or not the preoccupation of these persons with abstractions rather than with people is a characteristic that has become pathologically exaggerated in their descendents is uncertain.[10]Early infantile autism (Kanner, 1944)

The Austrian pediatrician Hans Asperger (1906–1980) was long supposed to have been the first scientist to describe Asperger syndrome; in 1944 he published a paper entitled Die Autistischen Psychopathen im Kindesalter (Autistic Psychopathy in Childhood),[11]On the origins and diagnosis of asperger syndrome: a clinical, neuroimaging and genetic study (Wendt, 2004) in which he describes 4 boys with special talents, but also with:

A lack of empathy, little ability to form friendships, one-sided conversations, intense absorption in a special interest, and clumsy movements.[12]Asperger’s Syndrome: A Guide for Parents and Professionals (Attwood, 1998)

The term autistic psychopathy, by the way, has nothing to do with the term ‘psychopathy’ as we use it today, but rather it meant a ‘psychopathology’, or mental disorder. It is essentially a term for autism disorder—a term that is introduced in the DSM-III-R (1987).

In the DSM-I (1952), autism is categorized under childhood schizophrenia.

This classification was retained in the DSM-II (1968).

36 years after Leo Kanner’s introduction of the term ‘early infantile autism’, the term infantile autism was now listed in the DSM-III (1980), and officially separated from childhood schizophrenia. 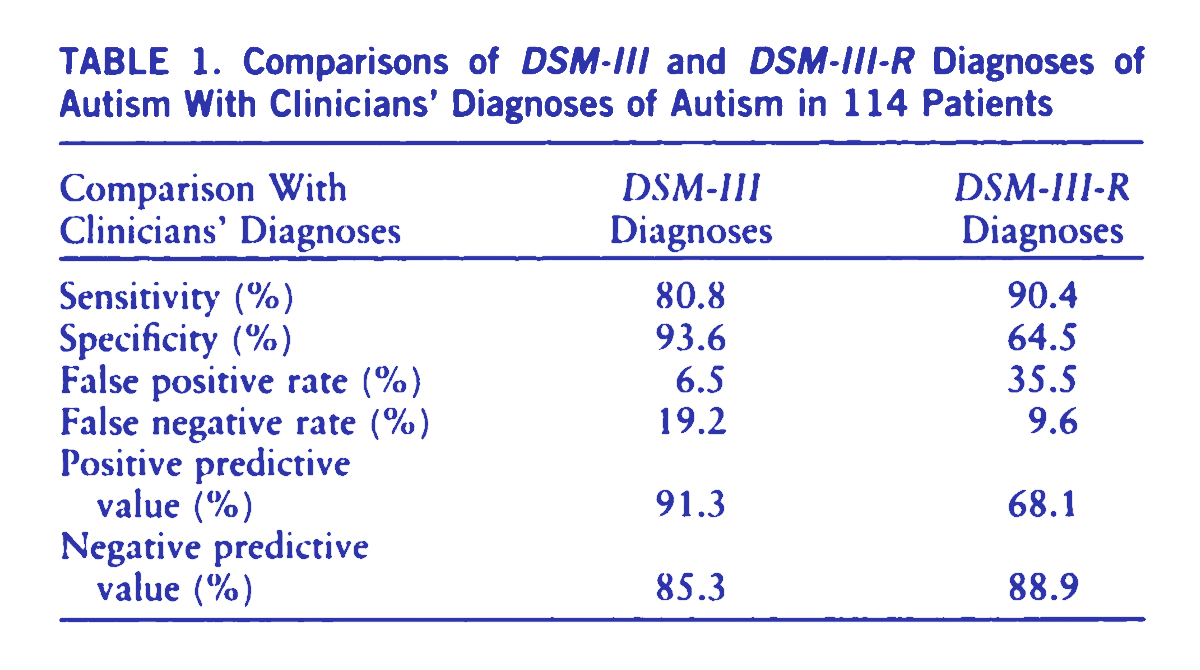 With an increase in sensitivity and a decrease in specificity, the diagnostic scope is broadened, and more people are diagnosed with infantile autism. As a result of this broadening of the diagnostic criteria, more people that do not have autism mistakenly got an autism diagnosis, but on the other hand, fewer people that do have autism are excluded from an autism diagnosis.

English psychiatrist Lorna Wing (1928–2014) introduced the English-speaking medical world to the work of Hans Asperger in her 1981 paper Asperger’s syndrome: a clinical account.

The name he chose for this pattern was autistic psychopathy, using the latter word in the technical sense of an abnormality of personality. This has led to misunderstanding because of the popular tendency to equate psychopathy with sociopathic behaviour.

For this reason, the neutral term Asperger’s syndrome
is to be preferred and will be used here.

The term ‘infantile autism’ was replaced by the term autism disorder in the DSM-III-R (1987), a revised edition of the DSM-III (1980).

A checklist of diagnostic criteria was also included.

Lorna Wing’s influential article proposed the term Asperger syndrome resulting in this new clinical diagnosis being included in the diagnostic manuals. Grunya Sukhareva’s work would still not be known at this time (nor even today), or the condition might have been called Sukhareva syndrome.

Imagine that, being a Sukharie instead of an Aspie! Maybe not a good idea, as the expressions “Suckie!’ and “You Sukh!” are too easy to come up with as insults. Let’s not give our mortal enemies more ammunition.

Autism spectrum disorder was added to the DSM-5 (2013) as an umbrella condition encompassing all previous separate autism-related diagnoses. Social (pragmatic) communication disorder (SCD) is introduced as a distinct diagnosis.

All subcategories and distinctions are generalized under the term autism spectrum disorder, and Asperger syndrome is no longer considered a separate condition, but a high-functioning form of autism.

But new research is also emerging that indicates differences between Asperger syndrome and high-functioning autism,[18]Subtyping the Autism Spectrum Disorder: Comparison of Children with High Functioning Autism and Asperger Syndrome (de Giambattista et al., 2018) which suggests some of the terminology the DSM abandoned in 2013 may have some utility. The term ‘high-functioning’ is questionable, but the correlations should not be ignored. It may prove useful to come up with different terminology to be able to talk about real distinctions between distinct presentations of autism, without necessarily implying anything about the level of functioning or support needs.

We don’t agree with everything that English clinical psychologist and professor of developmental psychopathology Simon Baron-Cohen (1958—) says, but we do praise him for using the term autism spectrum conditions (ASC) rather than autism spectrum disorders (ASD) in many of his papers, at least since 2000.[19]Linguistic processing in high-functioning adults with autism or Asperger’s syndrome. Is global coherence impaired? (Jolliffe & Baron-Cohen, 2000) ASC is a lot more neutral in language, which seems only proper considering autism is not characterized exclusively by deficits, and so to call our condition a disorder doesn’t really do it justice in my opinion. Even if we adhere to its definition, the negative language used does not do the perception of autism—and by extension how we ourselves are perceived—any good. Read more about the term ‘disorder’ and its consequences here:

Why is autism seen as a disorder?

While some other researchers use ASC as well, the term has not yet become common use. It was the unfamiliarity of the term and as such its low marketability that prevented us from calling our website Embrace ASC. But things may look a lot more positive, as the popularity of the term seems to be on the rise; Google Scholar gives:

What do you think?

What terminology do you find most appropriate to describe your condition? Let us know in the comments below.

By the way, who noticed the characters of Leo Kanner and Hans Asperger aging as you scrolled down?