We want to extend our sincere condolences to anyone affected by the Toronto van incident.

The link between autism & violence

The link between autism and violence is NOT autism. Research indicates that violence in autistic people goes by the following formula:

So it is Antisocial Personality Disorder (ASPD) that is associated with violence—not autism.

Do you know Alek Minassian?

Well, he is a household Canadian name now.

Alek is autistic, and would formerly be classified with Asperger’s syndrome.

On Monday (April 23, 2018), Alek got into a rented white van and ran over 26 people—mostly women on Yonge street—killing 10 and critically injuring 16, after releasing a Facebook message. See below: 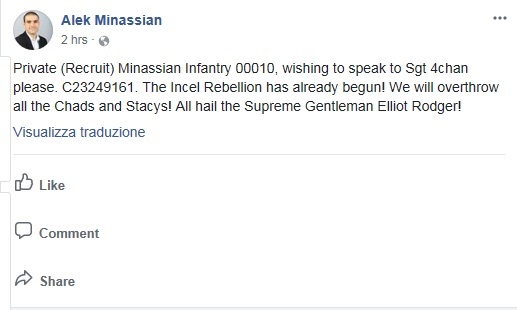 A leak from a Toronto jail cites anonymous sources who either spoke to or heard Minassian allegedly say inside the detention centre that he had no regrets for the victims.

One of those victims is a 7-year-old boy’s single mother. The child has been left with no relatives and no one to take care of him.

Incel: “involuntarily celibate” is a misogynist online culture of men (mostly white men, age 16–29) who don’t have access to sex and believe it’s a basic human right. Many blame women for their involuntary celibacy and advocate rape.

Chads and Stacys: Derogatory term used on Incel forum to describe men and women who have sex.

Elliot Roger: killed 6 people in 2014 by driving over them. Prior to his rampage, Elliot posted a video stated that he wanted to punish women for rejecting him and that he envied sexually active men and wanted to punish them.

These heinous acts including a number of shootings that have occurred by people who are apparently autistic have led to people linking autism and violence.

BUT…the link between autism and violence, as it turns out is not autism.

The link that occurred seemed logical—after all people with autism are often seen as having a lack of empathy. But I would say that we have alternating empathy, and empathy involved in situations that we understand.

In addition, autistic meltdowns can sometimes be quite aggressive. We have our triggers, though we are not aggressive or violent in nature.

A link between violence and ADHD

Thankfully a recent study in Journal of the American Academy of Child & Adolescent Psychiatry demonstrated that the link between autism and violence is not autism itself. What the research found (based on a sample of 30,000 people) was that the combination of ADHD and conduct disorder explains violent behaviour in autistic people.[1]Autism and Convictions for Violent Crimes: Population-Based Cohort Study in Sweden

In addition, previous research found links between ADHD and sociopathy, so we are beginning to make sense of people with autism that harm.

When a person has autism, low oxytocin levels make us less likely to behave unfairly to other people. But when a person also has ADHD, the added low oxytocin can lead to conduct disorder in people with certain associated factors.

Among individuals with autism, male sex and psychiatric conditions were the strongest predictors of violent criminality, along with parental criminal and psychiatric history and socioeconomic characteristics. There was some evidence that a delayed diagnosis of autism was associated with a greater risk of violent crime. Better school performance and intellectual disability appeared to be protective.

Dr. Natalie Engelbrecht
I’m a dually licensed registered psychotherapist and naturopathic doctor, and a Canadian leader in trauma, PTSD, and integrative medicine strictly informed by scientific research.And not only do I happen to be autistic, but my autism plays a significant role in who I am as a doctor and how I interact with and care for my patients and clients.