It’s June 18, which is Autistic Pride Day. It’s a day in celebration of our potential and our differences. But also, it’s a day dedicated to inclusion and neurodiversity;[1]Autistic Pride Day | Autism Wiki about acknowledging our value despite being different. And one way in which we can be different is in our gender expression.

Many autistics express gender nonconformity—not matching masculine and feminine norms. This may be partially accounted for by the increase in testosterone females receive—and an increase in estrogen males receive—in utero.

I love that my best friend (male) sleeps under his favourite sheet—a pretty yellow sheet with printed flowers. I love that my partner (AMAB) is more feminine than myself. I really love autistic guys—many are sweet and kind and do not engage in all the coarse sexual discourse that can make me feel uncomfortable.

Some of us are polyamorous, many of us are demisexual, I see a large number of autistics being asexual, and many autistic females are pansexual.

“There will not be a magic day when we wake up and it’s now okay to express ourselves publicly. We make that day by doing things publicly until it’s simply the way things are.”

“In 2013, Tammy Baldwin made history by becoming the first openly gay Senator in the United States. In her speech at the Millennium March for Equality, she spoke to LGBTQ folks, encouraging them to be out and proud. In this quotation, she states that the only way to normalize non-heterosexual orientations is for the queer community to act like they are normal, because they are.”

In people who do not identify with their sex assigned at birth, autism is 3–6 times as likely, according to the most extensive study to date examining the connection.[3]Elevated rates of autism, other neurodevelopmental and psychiatric diagnoses, and autistic traits in transgender and gender-diverse individuals (Warrier et al., 2020) Also, they are more likely to describe autism traits and to suspect they have undiagnosed autism. The past decade has seen people with gender dysphoria develop new ways of expressing their sense of self. Many who may have once identified as transsexual or transgender now refer to themselves as non-binary/genderqueer.

Only recently have researchers begun exploring the intersection of gender dysphoria and autism. The first study examining the overlap of the two conditions, published six years ago, included 231 children and adolescents. The researchers found the rate of autism among the children was 7.8%, and even higher among the adolescents, at 9.4%. That’s 10 times higher than the general population!

The most extensive study on autism and gender diversity to date established autistics as more likely than neurotypical people to be transgender or otherwise gender-diverse.[4]Elevated rates of autism, other neurodevelopmental and psychiatric diagnoses, and autistic traits in transgender and gender-diverse individuals (Warrier et al., 2020)) Five datasets included 641,860 people, primarily adults, of whom 30,892 are autistic and 3,777 identifying as gender diverse. The majority of the data is from an online survey conducted for a 2017 British television documentary on autism called Are you autistic?. The study’s lead investigator, Simon Baron-Cohen, professor of developmental psychopathology at the University of Cambridge Collection, led the data collection. This study found about 5% of the cisgender subjects autistic, whereas 24% of the gender-diverse people are.

Gender-dysphoric people face significant obstacles in finding ways to comfortably navigate the world. This requires transitions, flexibility, and self-advocacy, which are often difficult for people with autism. However, autistics also possess characteristics that can help with the process. They tend to worry less about their social status or reputation and the opinions of others.

“Equality means more than passing laws. The struggle is really won in the hearts and minds of the community, where it really counts.”

“Barbara Gittings is known for being an American activist fighting on behalf of the LGBTQ population. In her most well-known fight she took on a Goliath: the United States government. She picketed to stop them from barring LGBTQ applicants from employment. However, as she states in the above quote, her greatest wish was not for laws to pass, but for true acceptance and equality.”

Below are various quotes from autistic people from the Embrace Autism Private Community on their sense of gender, sexual orientation, and sexuality.

Figuring out my sexuality has been a lifelong journey of discovery. It has been more of a process of discovery through experience than something I could figure out by thinking.

From the age of about 8, I had persistent fantasies about being a woman. I didn’t share that with anyone for over a decade. I could hardly make sense of what it meant for myself, and I hid it from my girlfriend as a teenager. By 19, I could finally acknowledge that I was transgender. Or maybe the word ‘transgender’ just gave me the means to understand my own feelings.

I was 21 when I decided I wanted to transition, so I went to a transgender specialty center to start hormone therapy. My mom made an appointment for me and mentioned that I had Asperger’s (which was the diagnostic designation at the time), and the secretary paused and asked, “How would that work? Will you come in and answer questions for him?” It became immediately apparent they were not up to date on the significant overlap between autism and transgenderism. They would have already worked with many autistic people unknowingly.

I was able to start therapy, and was assessed to see whether it was right for me to take hormones. But in order to start hormone therapy, they had a rule that I had to present publicly as a woman for 3 months before taking hormones, meaning that I would have had to walk publicly in female clothes, despite obviously looking male. I could not get to the point of being comfortable doing that. They told me that my autism was getting in the way of their process, and recommended I first get specialized therapy for autism before they would help me. I did go into therapy, but my anxiety around their protocol didn’t go away. Nor did my desire to be a woman, but I gave up on that dream.

Now I am 32, and I am still just as sure that I want to transition. I’m shocked and sad that I sought help 11 years ago, but due to an arbitrary rule I have still not been helped, and I still feel sad about my male presence every day. But with Natalie’s support and a new gender-affirming doctor in Canada (the specialty center was in the Netherlands), I will finally—hopefully—be starting the transition process this July.

I hid my asexuality my whole life. I just figured that sex was a part of a relationship and no one would want me if I did not want to have sex with them.

My gender is an exercise in logic, double and triple negatives guarding against the uncertainty of being labeled, “I’m not never a boy, but I can’t foresee see myself not thinking I don’t ever want to be a man”.

I struggled all my life to understand my sexuality because I knew I wasn’t straight, but I never really fit into any of the boxes on the LGBT+ spectrum. Discovering I am autistic, and the impact that autism has on a person’s understanding of gender and sexuality was a real game-changer. It’s freed me up to embrace all aspects of who I really am.

I didn’t start to question my sexuality or gender identity until after getting married to a cishet man. It took me a few years to explore my identity and to come to terms with it, but it never affected how I felt about my husband. It just meant that I had finally stopped hiding who I was from myself. I had imposter syndrome for a while, but now I’m sure of my identity as a nonbinary pansexual person and I know that I’m valid. Finding out that I’m autistic—and that autistic people are more likely to be LGBTQ—was the icing on the cake.

I identify as agender, but I’m not really sure about asexual, but I think I’m close. At the very least, sex is nowhere near as important to me as it seems to be for most people, and I can hardly fathom myself doing anything like that. Perhaps that has more to do with alexithymia?

My sexuality is confusing to me, especially since I’ve only begun exploring all options as a married adult who didn’t feel like options when I was younger. My confusion is compounded by my feeling that I haven’t suffered enough to be welcomed into the LGBTQ+ community. Sexuality is strange and confusing.

I’ve always had a difficult time understanding and navigating gender. I don’t seem to be able to conform to any specific gender at all. I generally understand myself as agender or non-binary, grey-ace so mostly asexual. Mostly aromantic, but sometimes panromantic. I think the concept of auti-gender is interesting!

I have never completely identified as 100% female. My masculinity has always been extremely important to me, I think I’m probably demisexual or gender fluid. I came of age in a time without labels so just thought of myself as androgynous. I was told I was a girl and how to behave accordingly. I was often mistaken for a boy. It wasn’t all bad. I do love dresses, one piece and I’m done, no worries about matching top to bottom. I also hate the feel of things around my waist, dresses solve that problem. If I wasn’t wearing a dress, I was often wearing men’s pants draped lightly over my hips.

I did not date or have a romantic relationship until I was 27-28 years old. I have always been serious, and just wasn’t sexually driven like most men. I really didn’t understand my own sexuality when I was young. However, I am attracted to women and femininity – but not driven physically as you might imagine. I connect with intellect, and then physical beauty. All I know is that my cool, logical demeanour is my baseline state, but I discovered that once I connect intellectually and emotionally, I become romantic and passionate in my relationships.

Many of us end up in traumatic relationships not because we “don’t understand them” (though maybe there is arguably a component of this) but because the so-called “healthy” and “normal” ones (by neurotypical standards) are equally as traumatic. We need to start allowing autistic people to define their own sense of relatedness and be curious about it instead of rushing to categorize it.

And one more Mr. Pluts 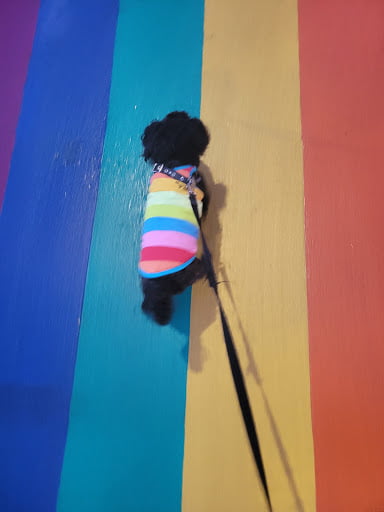