How autistic people are perceived

The image below—our own rendition of an image entitled ‘Asperger/Autism’ by Fuchskind—gives a pretty good overview of how autistic people are seen by various people and institutions:

What I have seen as an autistic woman who can pass very well as neurotypical is that people think that autistics are all either low-functioning or savants—or both, such as the depiction of Rain Man. I think those are the main assumptions that are made about us.

Next comes that we think, process, and speak differently. Initially, I thought about autism as the media had taught me, and so I never thought I could be autistic myself.

However, I was concerned about how to speak to my partner Martin before we started chatting on Quora, as I knew he is autistic and I didn’t know what the best way to approach them is…and so I bought 6 books on autism. “What are the rules about speaking to an Aspie?” I asked around.

And yes, I guess I was sort of different…I gave Martin my “friend contract” when I messaged him. Martin thought I was just downright weird for establishing a friendship by contract…

Our (autistics’) thoughts with regards to stereotypes have been greatly understudied. A study this May (2018) looked at how autistic people thought they are perceived by others, and what they understood the autism stereotypes to be. Three main themes showed up:[1]Autistic people’s perspectives on stereotypes: An interpretative phenomenological analysis (Treweek et al., 2018) 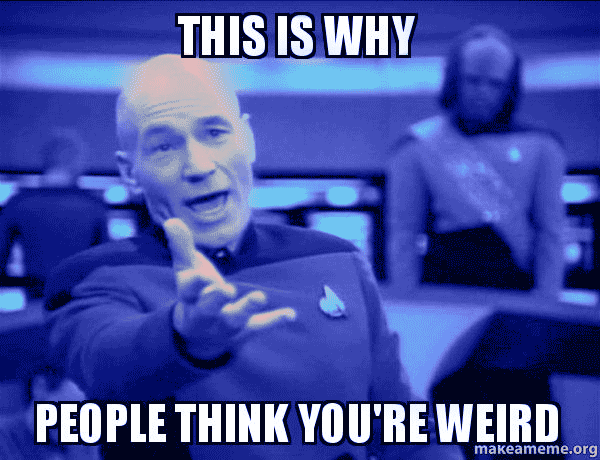 The primary stereotype is that autistic people are “weird”

Most participants thought that autistic people are perceived by others as being “weird”. When asked what he thought the autistic stereotypes are, Bob’s understanding of how others may perceive autistic people was in relation to their general weirdness, or sense of being odd.

Bob: They just sort of like, just generally weird I guess and sort of in their own world most of the time.

Bob: Probably more leaning to negative, I imagine, I guess, like any sort of like, you know, just like you excluding other people is pretty bad in my book I guess. So, I imagine it would be like that.

Steven: Well, they probably like support bullying of people that have it, no, it’s not good.

Margaret: I think most stereotypes are negative, because the very nature of a stereotype is to create a perimeter within which you should or ought to operate, and people are just not like that, and the minute you step outside the boundary of a stereotype, so if someone says ‘oh, you’re like this, therefore you’re not allowed to do that,’ the idea that you’re creating a boundary around that person, beyond which they shouldn’t or ought not to cross, so it’s saying, well, if you can do that, that means you’re not disabled.

Like my Asperger’s, that’s only like a tiny part of autism. And it affects people in a lot of different ways, but they seem to just say, ‘he’s got autism, he’s like this’ and it’s not right.

Because I’m more mild, so I’m more not got the worst of it, like I can—like most people don’t know I’ve got it, because I can deal with situations better, but I know there are people worse who might fit it a bit more.

Because as I say, this person, to me, from my point of view, she’s totally different to what I would think—obviously I don’t know her personally, I would think somebody else, because she seems quite easy talking to me and other people she always—what’s the word—nothing seems to trouble her from my point of view, the things that she does, like without, thinking I’d struggle to do, like talking or communicating.

Communication (11), Deviant responses (1), Labels (6), Semiotics (2), Societal perception (1), Stereotypes (2)
Click on one of the tags above to find related content