“The garden of my mind wasn’t weeded as thoroughly as others.
As a consequence, I’ve managed to grow some unique autistic flowers.”

A synapse is a structure that permits a neuron to pass an electrical or chemical signal to another neuron, and thus, information can be exchanged between neurons. Normal development of the brain in many mammals including humans is governed by a synaptic overgrowth (a period where a lot of extra synapses are generated) followed by selective synaptic pruning (a process by which “irrelevant” synapses decay in order to streamline the synaptic network).[1]Synaptic Pruning in Development: A Computational Account

The extent of interconnectivity in the brain depends on the number of synapses that connect neurons. Specific neurological networks—as well as astrocyte networks[2]Do neurons alone cause consciousness? | ScienceNordic—give rise to particular functioning. All these networks together give us our mental abilities, behaviors, and personality, and the complexity and sophistication of this network are what give rise to elevated consciousness.

In this post, we will explore how different synaptic processes influence who we are or will become. Whether a child develops into an autistic person, or possibly a psychopath.

During infancy, there is a burst of synapse formation, particularly in the cortex. Starting from birth until adolescence, there is a synaptic pruning process preceded by synaptic overgrowth, and thus the neurological network is optimized by removing redundant connections. This is the learning process, and it effectively makes the brain more efficient. Adults have been found to have approximately 41% fewer neurons than newborns.[3]Excess of Neurons in the Human Newborn Mediodorsal Thalamus Compared with That of the Adult (Abitz et al., 2007)

In secondary psychopathy (outside of academics better known as sociopathy) on the other hand, the opposite is observed. In this case, the person is born with a neurotypical brain formation, but through severe abuse, neglect, and prolonged trauma prior to the age of 6 an excess synaptic pruning occurs, which causes the person to have a reduced emotional response.[5]Psychopathy: cognitive and neural dysfunction

Whereas the neurotypical brain goes through a regular pruning of redundant neural connections, due to trauma certain neuronal pathways can potentially be removed in order to reduce its response to the abuse. The selection synaptic pruning follows the “use it or lose it” principle seen in synaptic plasticity, and due to prolonged trauma, the potential defense mechanism can be to “lose it” rather than to be overstimulated by it.

In (primary) psychopathic individuals it is thought that there is a premature arrest in the synaptic pruning process or a lack of pruning (similar to autism),[6]Increased Volume of the Striatum in Psychopathic Individuals but this is likely coupled with a deficiency of synaptic growth.[7]Thicker Temporal Cortex Associates with a Developmental Trajectory for Psychopathic Traits in Adolescents As such, psychopaths tend to pay attention to detail similar to those on the autistic spectrum, though the kind of details they observe may differ, as brain regions are affected differently in both autistics and psychopaths. In psychopaths, it’s likely that there is synaptic and neuronal pruning in some areas of the brain, coupled with deficient growth in others, resulting in ineffective and/or dysfunctional processing.[8]Examining the effect of psychopathic traits on gray matter volume in a community substance abuse sample

Synesthesia, for example, is quite common in brains that show a lack of synaptic pruning[9]Synesthesia: Opening the Doors of Perception, causing anomalous patterns of connectivity.[10]The immune hypothesis of synesthesia Some forms of synesthesia (such as grapheme–color synesthesia) emerge due to cross-activity, where clusters of neurons are activated at once. Effectively more neurons than necessary are being activated, which can give rise to combining of senses that a brain with fewer neuronal connections would likely not experience.

Other forms of synesthesia (such as lexical–gustatory synesthesia) emerge from increased connectivity between adjacent regions in the brain, thus connecting senses as well. Note that although synesthesia may seem extraordinary, it’s not necessarily a beneficial or wanted experience; it can be a distraction[11]​A Mental Condition Can Make People Seem to Spew Ticker Tape | Gizmodo, it can drastically undermine one’s life, and can even be hurtful.[12]Some People with Synesthesia Feel Other People’s Sensations of Touch, Painful and Pleasurable

Synesthesia occurs in 4% of the population,[13]Synaesthesia: The Prevalence of Atypical Cross-Modal Experiences and autism has a prevalence of at least 1%, based on a study from 2018.[14]Prevalence of autism-spectrum conditions: UK school-based population study If there were no correlation between the two conditions, then synesthesia and autism should co-occur in only 4 in 10,000 people (0.04%).[15]Is synaesthesia more common in autism? 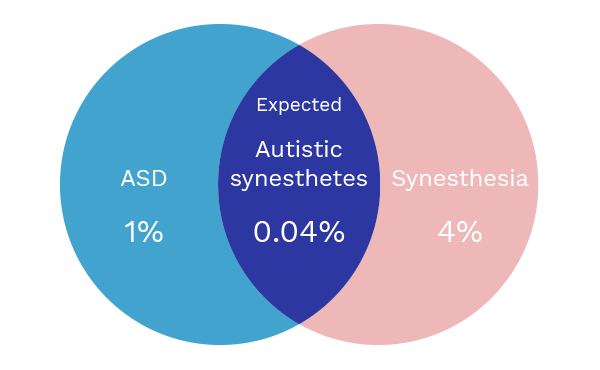 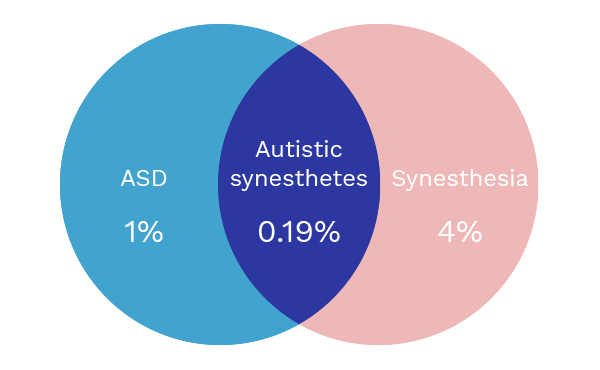 This makes the co-occurrence of autism synesthesia 7.75 times greater than expected. This also points to the fact that the lack of synaptic pruning seen in autism and the consequent hyperconnectivity results in an increased chance of developing synesthesia.

For more information on autism and synesthesia, read our following post on it:

Certain psychedelic compounds like psilocybin increase brain activity across the brain and form different neuronal connections in the brain, which allow communication between parts of the brain that do not conventionally communicate.[17]This Is Your Brain on Magic Mushrooms | Science Alert This can temporarily give rise to experiences of synesthesia.

In the image below, you can see neuronal connections in a brain without psilocybin (a) and with psilocybin (b).

Savant skills are linked to damage to areas of the left hemisphere, and right hemisphere compensation. Since the left hemisphere shows increased sensitivity to testosterone, men are predispositioned to acquire savant abilities. But the key to the emergence of savant syndrome is growth factors—such as the brain-derived neurotrophic factor (BDNF)—which stimulates growth and differentiation of new neurons and synapses.[20]Neurotrophins: Roles in Neuronal Development and Function They also promote the synaptic communication development of new synaptic relations after neuronal damage.[21]Savant syndrome: islands of genius in a sea of low intelligence | Encephalos

For more on savant syndrome, have a look at:

The consequences of synaptic growth and/or pruning to society and the human personality are significant. When there is a lack of synaptic growth and both excessive pruning and a lack of pruning in different brain areas during the third trimester, society gains a psychopath; or a sociopath due to pruning caused by an adaptation to surviving abuse. With a lack of synaptic pruning, society gains an autistic person; in a smaller number of cases people with synesthesia; and in rare cases a savant.

As technology allows us to understand more about the brain changes both physically and functionally, research is looking into how to harvest these capabilities in neurotypicals. Perhaps one day, we will be able to purchase a skill, such as the ruthlessness of the psychopath, or the musical genius of the savant.

You are going to send email to