Last week I finally went to the dentist again, after having not gone for almost 3 years. It was quite a bizarre experience, so I want to share that with you, and ask if other autistic people have similar experiences.

Warning: a photograph I will be showing near the end
of the post might be difficult for some people to stomach.

I stopped going to the dentist because I was too anxious to go. Not because I mind going to the dentist though. I used to go every 6 months for check-ups and cleaning. One time I missed an appointment, and it became too difficult to reschedule. At the time I was dealing with too much anxiety to use the train anymore, and my dentist happened to be 2.5 hours away from me, close to my dad’s. I never tried finding a dentist where I lived for almost a decade. Last year I moved to Canada, and have been wanting to go to a dentist ever since!

So I was very excited to have a dentist’s appointment. I sat down in the chair and put on the tinted glasses. The dentist looked at my teeth and noted there was a lot to clean, which I knew, hence my relief in being there. She told me to let her know if I need a break. “Sure”, I said, not expecting to take a break if it’s anything like my dentist experiences in the Netherlands.

During the cleaning process, I noted a particular theme being played out. The theme was one of concern. I have never had a dentist shown so much concern! Statements like:

“Are you sure you don’t want to take a break?”

“Wow, most people would be in distress, but you haven’t winced once.”

“Are you sure you are not in pain? I usually freeze the teeth at this point during this process.”

But no, I was fine. She also stated that usually, she would split the cleaning process over two appointments, but since I currently have no insurance and since I wasn’t showing distress, she did me a favor by doing everything in one appointment. That worked for me!

At one point she asked, “Do you have a high pain threshold or something?”

But really, I was quite confused about why I was getting all these questions. Sure, the process was uncomfortable, and now and then I did experience discomfort to a level that could rightfully be considered painful. I could very well understand some people would be in distress by the process, as it felt like something more serious was going on than just a routine clean job. There was something distinctly medical about it, rather than conventional dental hygiene. Something closer to surgery than brushing your teeth in the evening in your pajamas, if you get my drift. So I would understand people being queasy. But uncomfortable as it was, it was perfectly endurable. Apparently for almost two hours, as Natalie told me, though it really didn’t feel that long. Time goes by when you are having fun, right?

It wasn’t until the job was complete and I looked to the side at the table with all the tools, that I got an inkling of what all the questions were about. In the image below, you can see blood on the table, including some small bloody chunks. 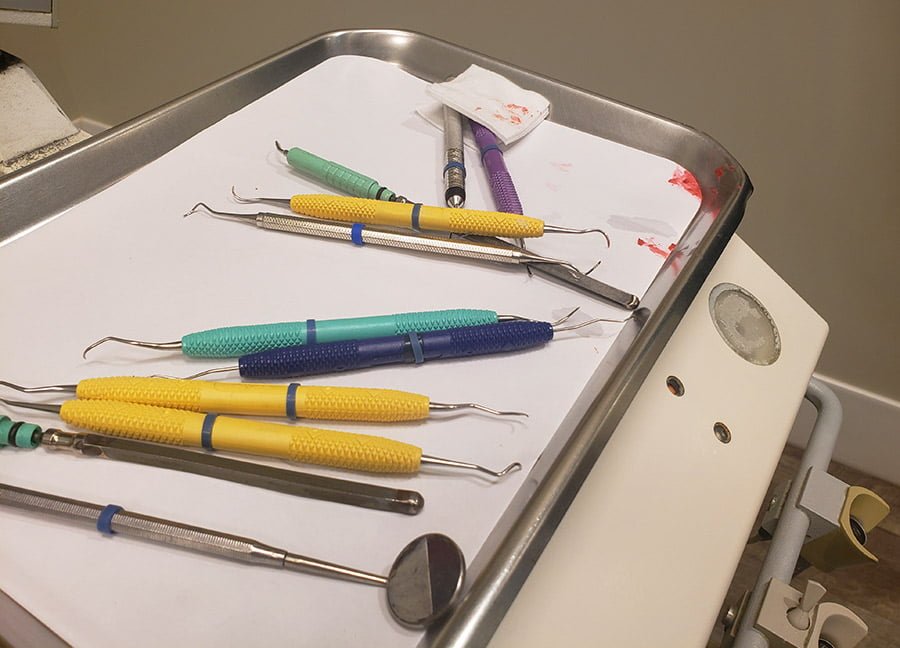 I thought to myself, “Did I just visit the dentist or an abattoir? Did I experience an autopsy?”

I am being hyperbolic, of course. But you have to admit this is nothing like the brushing teeth in pajamas I talked about earlier.

If you read my previous post (Sensory Sunday #2), you will have read that I am always looking for design and typography. I noticed this beautiful typography on the X-ray unit in the treatment room. For those interested in typefaces—and for those traumatized by the photo above—let this beautiful design offer you some distraction:

And in the image below you can see a close-up of what I consider to be the most beautiful and exciting part. The U that puts all the weight in the left vertical and nothing in the bottom curve, the 7 with the deep indentation, and the 0 with the thin, vertical counter space! Maybe you need to be me to get a thrill out of these details. And why do the hairline strokes of M seem to be thicker than in the other letters?

I asked on Twitter what typeface might have been used. Type designer and type historian Craig Eliason suggested ‘LUMIX-70 II’ is probably custom lettering.[1]Craig Eliason | Twitter I figured it might be, though a typeface that comes relatively close is interestingly called URW Martinique.

In the next post, I have a deeper look at autism and pain sensitivity.