A children’s TV show on autism

Have you heard of a TV show called Pablo?

We were asked to recommend and share their Facebook page on Facebook. Having looked into it, I think the show has a lot to offer for kids, and seems to be a great vehicle for educating children about autism, diversity, and inclusivity.

As such, I wanted to write a short post to share this TV show with those who have small (autistic) children. Or maybe you as an adult want to give it a chance, too. Who knows what you might learn and/or enjoy?

Pablo is a groundbreaking animated series created by Gráinne McGuinness, about a five-year-old autistic boy who draws imaginary animal friends that come to life. 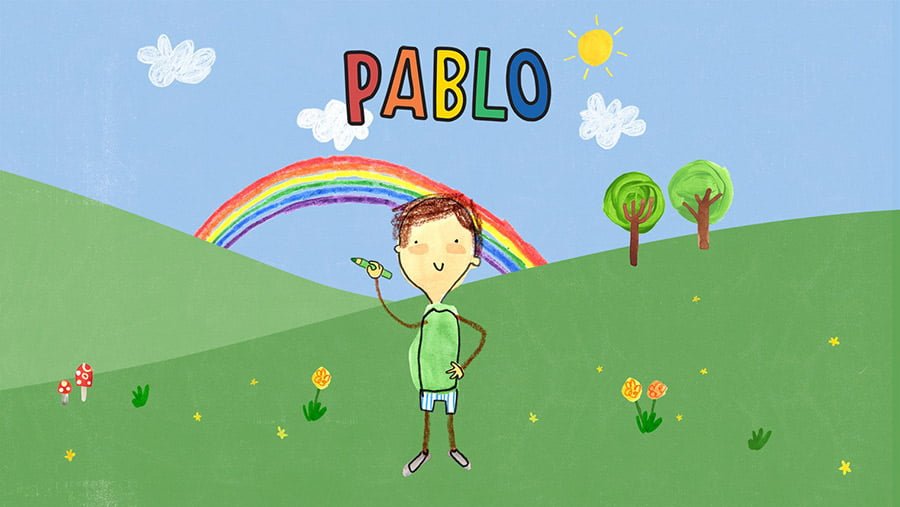 As Pablo is both autistic and a child, he obviously sees the world in a particular way, which poses certain challenges. When Pablo is confronted with a challenge, he draws on his notepad with his crayons and enters his imaginary world, called the Art World.

In the Art World, Pablo meets his animal friends, called Book Animals, who each represent a certain trait of Pablo. Together, they help each other overcome what Pablo is struggling with, such as going to a party, answering a question, or exploring why sandwiches are cut in triangles rather than rectangles. In the image below you can see Pablo and his animal friends. 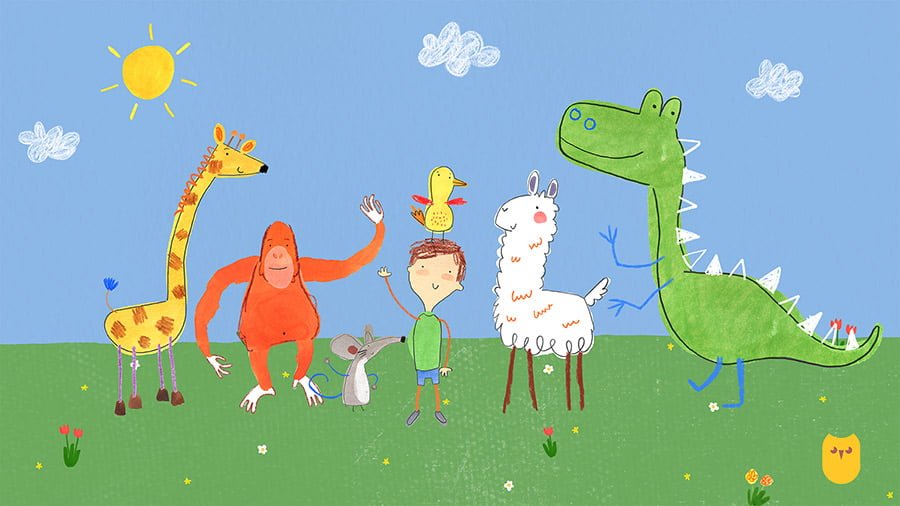 Some of these challenges stem from an autistic child exploring and discovering the world. Other challenges strike me as being of a more autistic nature. For example, asking why sandwiches are cut in triangles is not too dissimilar from some of the philosophical questions I am inclined to ask even today. And to be fair, if we are going to cut sandwiches as triangles anyway, why aren’t bakers baking triangular bread, thus saving us time in cutting? Never mind answering that, as I just thought of 20 counter-arguments. I see why bread is rectangular now.

But this is exactly what resonates so deeply about the show for me. Even if answers to certain questions are seemingly obvious, I still tend to explore them, and often come up with answers or solutions that are less conventional, but still entirely valid. This trial and error method is a fundamental method of problem-solving in the autistic person’s tool kit. Being different and a marginalized group, we come to understand the world, social interaction, theory of mind, etc. through failing, getting up, and learning from our failures.

Fortunately for Pablo, he has his anthropomorphized animal friends to help him with all of that.

I mentioned how each animal friend represents one of Pablo’s traits. It’s actually quite amazing what aspects they do represent, because many of them say something about autism, or often co-occurring conditions. So let’s have a look at the characteristics of the Book Animals.

The producer of the show, Gráinne, was inspired by her autistic nephew Lucas. She says:

I was looking at a situation when he was playing with his cousins and thinking, wouldn’t it be great if the kids around him understood a bit more about what his perspective on the world was?[3]How one Donegal woman was inspired to create an autism-centered children’s show | Donegal Woman

It’s not just about increasing understanding and awareness of autism, however. Pablo was created to inspire a diverse group of children, whether they are autistic or not. Gráinne says:

Every child will love Pablo. He’s funny and smart and has a terrific imagination which takes him on wonderfully colourful adventures, which young audiences will want to share. He also sees the world differently, and thinks and processes things differently.[4]How one Donegal woman was inspired to create an autism-centered children’s show | Donegal Woman

And that difference is exactly what the show celebrates. She says:

The series celebrates that difference, inviting viewers to see the world through the eyes of a child with autism, and to be enthralled and entertained by the view. The hope is to begin a new, more optimistic conversation about autism.[5]How one Donegal woman was inspired to create an autism-centered children’s show | Donegal Woman

That optimistic conversation starts with the production of the show. Because here is something really cool about Pablo: the writing, as well as the voices of the characters, are done entirely by autistic people! I believe it is, in fact, the first-ever program to have an all-autistic core cast. I think the show deserves a lot of praise for that, not only because it employs autistic people, but for utilizing our particular talents and perspectives.

The show is clearly informed by how autistic people view the world; it’s not based on experts’ accounts of autism, but on the real-life experiences of autistic people. And yet, as you saw from the descriptions of the characters, the show also relays information that has often been documented by the research literature. The show is impressively comprehensive for a children’s show.  It’s also evident that the show is driven by our desire for inclusion, hence diversity and inclusivity are big topics of the show.

Speaking of praise, Pablo won Best Preschool Programme at the 2019 Broadcast Awards, and was nominated at the 2018 British Academy Children’s Awards in the category Digital.

Season 2 just started last October, and the show is gaining popularity as it’s being broadcasted in an increasing amount of countries—29 so far![6]Pablo international broadcast | Wikipedia Season 1 is available on Netflix, and you can find some videos on YouTube as well. Here is one, about Pablo floating away:

I find the art style of the show very interesting and charming. The hand-drawn style puts the show more firmly inside the world, experience, and perspective of young children. I think this humanizes the show in a way most animated series don’t, and establishes a firm connection with the target audience.

But what I especially like is that the characters are not colored inside the lines, as you can see more clearly in the image below. Again, this relates to the childlike drawing style, but I get the impression that it might also be making a sociopolitical statement: that you don’t have to appear normal or conventional, that it’s okay to be different, and that imperfection can be charming rather than inferior. Perhaps I am reading too much into this, but given the inclusive nature of the show, I do think there is significance to this. 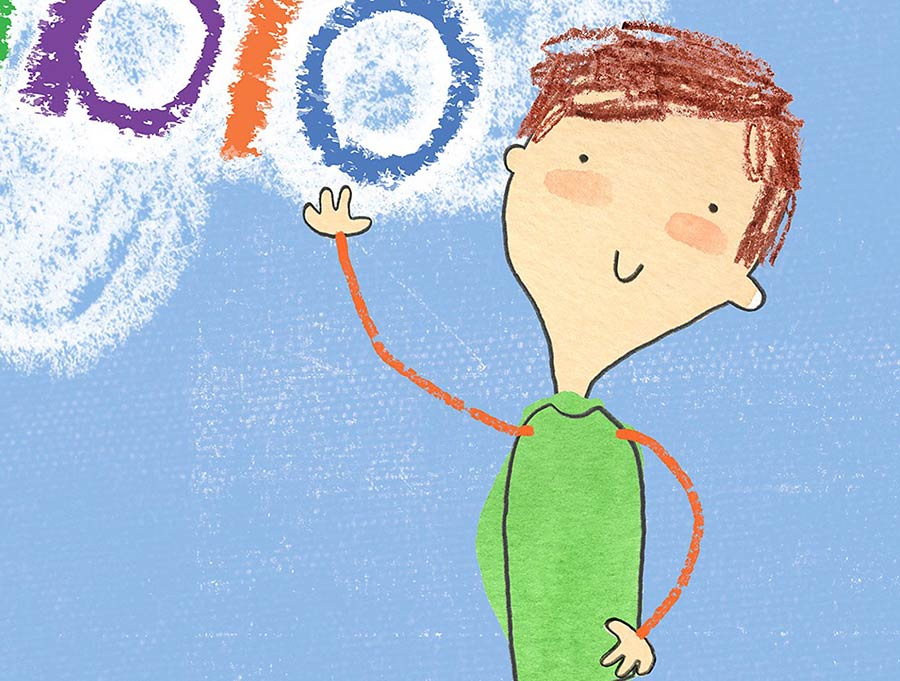 I am reminded of Natalie’s experience at school, where she insisted on coloring the Sun and clouds in a drawing purple, since that was her favorite colors. She was told by her teachers that she shouldn’t be doing that, as the Sun and clouds are not purple.

Of course, they were quite right, but also wrong to do that; they unnecessarily undermined and limited her creative expression. It would have been nice if there was a show like Pablo when we were young, so we might have learned that our preferences are perfectly fine!

Pablo is a very creative and endearing show, and is likely to warm the hearts of children and parents alike. If you have young kids, do consider watching an episode together!