The Online Alexithymia Questionnaire (OAQ-G2) is a self-administered questionnaire to measure difficulty in identifying and describing emotions and feelings, and distinguishing between the accompanying bodily sensations.

Who the test is designed for

The test was developed to address some of the shortcomings of other alexithymia tests, as well as to offer a free alexithymia test for the community.[1]Alexithymia Questionnaire | Alexithymia.us The test is particularly suited for:

The OAQ-G2 measures alexithymia, with the following factors:[5]OAQ-G2, Introduction and Factor Targets (Thompson, 2007)

For more information on these factors and the corresponding test items, have a look at the OAQ-G2 factors section below.

The OAQ was revised in 2007, thus creating a second-generation questionnaire (G2), reflecting its ongoing evolution as independent from other alexithymia questionnaires.[6]OAQ-G2, Introduction and Factor Targets (Thompson, 2007) The OAQ-G2 has been translated into three languages:

The OAQ-G2 consists of 37 statements, giving you 5 choices for each statement:

To get significant results, a participant needs to answer no more than a maximum of 17 questions as undecided.

You can take the test auto-scored or self-scoring:

The scoring of the OAQ-G2 is as follows:

The overall score can offer a good indication of whether you have alexithymia. However, in some cases, you may get a relatively low score despite scoring high in some areas. Fortunately, the test gives more details, but you have to scroll down to the Detailed Results section of the test.

How reliable, accurate, valid, and up to date is the test?

I found the OAQ-G2 relatively easy to take.

Alexithymics’ emotional blindness does not necessarily allow them to be aware of what they are feeling. With that in mind, I took the test and assessed the statements carefully—knowing that I am not always effective at knowing what I am feeling. If a person does not have a good awareness of their inner mental and emotional world, it can skew the results. My own score of 83 means that I have very few alexithymic traits, and based on the threshold I have no alexithymia.

However, the breakdown reveals I can actually have high alexithymic traits for identifying feelings, which indeed I do. A tremendous challenge I’ve found in my personal therapy is how to answer the question: How does that make you feel? Another category that shows fairly high alexithymia for me is vicarious interpretation of feelings.

So despite my overall score saying I have almost no alexithymia, it is important to look at the breakdown to get a better understanding as to whether you do in fact have alexithymia in particular areas. This information can be very useful when it comes to self-insight and addressing potential issues or areas where you can grow.

The first time I took this test, I missed seeing the Detailed Results, as there is no indication that there are more results than your overall score. 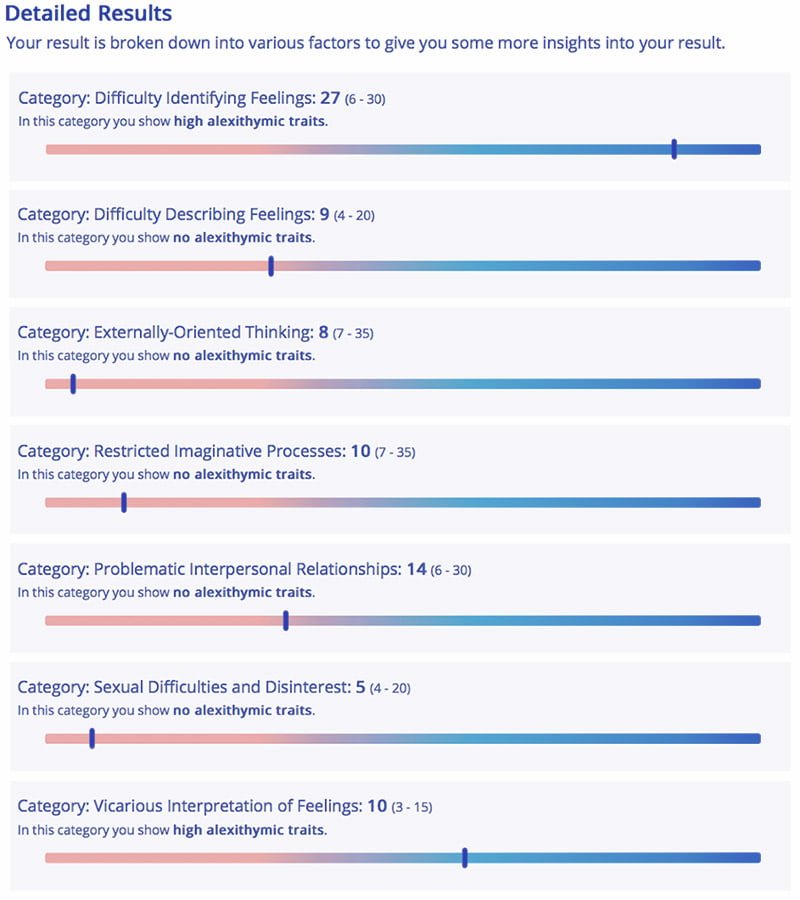 The Online Alexithymia Questionnaire is quick, easy to understand, yet informative and helpful. With the choices graphically illustrated under each statement, it is not necessary to continually scroll to the top and refresh the choices. With each answer highlighted, it is simple to see where a statement has been skipped or missed. All are easily understood and voiced in such a way that I never answered undecided. The scoring has a breakout of 7 categories and the points for each, which makes it clear what areas you are likely to experience challenges.

The items of the questionnaire can be divided into the following categories:[8]OAQ-G2, Introduction and Factor Targets (Thompson, 2007)

Select the answer that best reflects the extent to which you agree or disagree with each statement.

After the OAQ-G2, consider taking one of the tests below.

Measures difficulty in identifying
and describing emotions and feelings

Measures your emotional ability to
understand and respond to others

Measures camouflaging, and may account
for lower scores on other autism tests

Online autism tests can play an essential role in the process of self-discovery, and may inform your decision to pursue a formal diagnosis. For a formal assessment, please see a knowledgeable medical professional trained in assessing autism.

If you are looking for an autism assessment,
Dr. Natalie Engelbrecht can offer help!
You can find more information here: