Look at the tank below. Do you see a fish? No, you don’t. I am going to tell you why. And no, they didn’t run away from home! 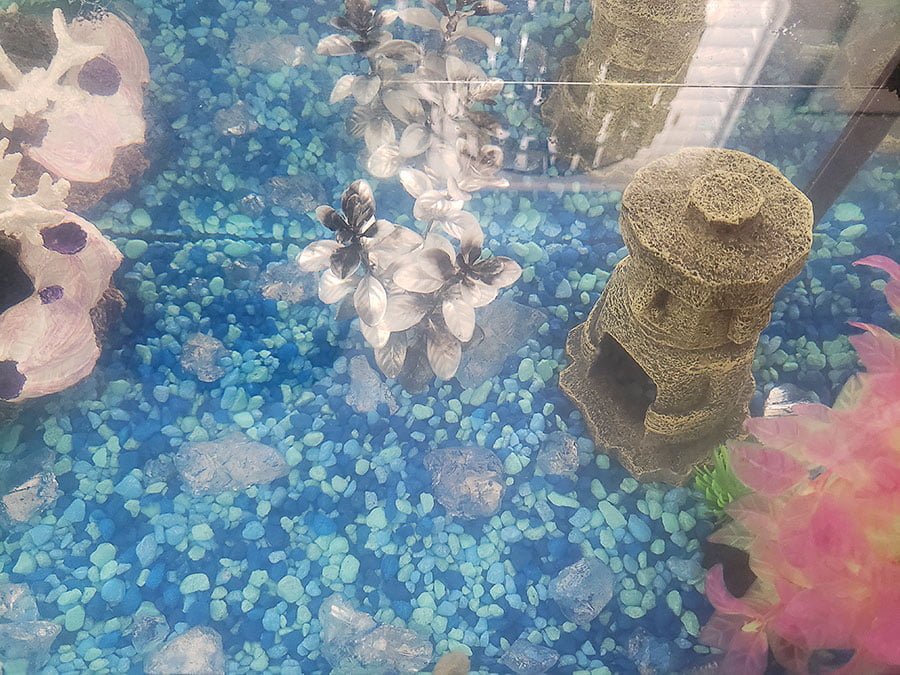 Here is a little story that I think perfectly exemplifies how empathy works in autism—or can work, as autistic people are not a heterogeneous group, and experiences are bound to vary.

Last year we bought two betta fish which we sometimes called Alpha and Betta, although I have to confess I would refer to both as ‘fish’. I never had a need to call them by name, and I don’t think I would have captured their attention that way, anyway. I find fish are stubborn creatures; if they don’t want to listen, there is no way you are going to make them listen.

Anyway, some months ago, one of them got sick. Let’s call him Alpha, since he was the first to go. He had trouble swimming straight, and gas in his body made him buoyant. If Alpha were human that would be great, but as a fish that posed a problem. We isolated him and gave him healing baths and frozen peas, but no amount of peas was going to make him recover. We tried for a while, but he wasn’t getting any better, and as he was noticeably suffering, we looked up humane ways to kill Alpha. Recommended methods included freezing and “letting it go to sleep” in clove oil. Although the oil as sedative properties, I realized this method is probably more like suffocation than blissfully going to sleep. I was shocked that these methods came recommended as humane. So I came up with a much quicker and more humane approach, which was to knock it on its head with a hammer. I took it outside, and quickly put it out of its misery. It was hard to do and I cried, but I felt it was the best way, for Alpha’s sake.

Betta was a lot stronger. But let’s call him Omega, since he was the last one to go.

Omega was a real survivor at heart. One time when Natalie and I were painting the office, Natalie fell off the ladder onto Omega’s fish tank and broke it. Omega was flapping around in between shards of glass on my desk. Fortunately, we got him back in the tank without injury. Well, without injury to the fish; Natalie had a huge bruise on her thigh.

Omega always looked better than Alpha—stronger and more colorful. But recently his colors looked dull, as they shifted from deep blue to a desaturated purple. He also wasn’t swimming straight anymore. And so we isolated him and added droplets against fin rot.

Omega was on day 5 of his treatment, and he was looking a lot better; his colors were more vivid, he swam straight, and I no longer saw a grainy texture of black dots on his fins. I was excited to put him back in his tank, since he has remained in a lettuce bowl for the last 5 days. So I cleaned out his tank, and filled it with water.

I thought, he is better now, and he is going to be back home soon after 5 days of isolation, so why don’t I give him a treat? We didn’t have a warming element in his tank, so the water is actually on the cold side. So I figured for once, let me prepare his tank with warmer water, so he can live comfortably at a higher metabolic rate. I am going to give him the environmental conditions the little guy deserves!

I added hot water to the tank, but the water ended up too hot, so I let it cool down. In hindsight, I shouldn’t have added much warm water at all, because it features a lot of heavy metals. After a while, the water seemed just above room temperature. It was perfect!

I transferred Omega to his home, and added the water from the bowl which has his bacteria, which he needs. He went into the tank, and I noticed how he was really enjoying the warm water! He was swimming on his back out of excitement and joy.

Then he started swimming vertically. I thought, “Hey, that is curious.” I said, “Hey Natalie, come look. Isn’t his behavior strange?” She saw the fish—who at this point wasn’t only vertical, but started sinking—and felt the water, and she exclaimed, “Oh my god, that is way too hot! You are cooking him!” I panicked as I tried to get him out of the tank and back in the lettuce bowl. He kept sinking, so it was difficult to get a hold of him. Eventually, I got him and put him back in the bowl, but it was already too late. His body was motionless now.

My initial reaction was an unemotional one. I thought to myself, “Oh damn. I made a mistake, but oh well.” I think this was an alexithymic response as a defense mechanism; by cutting myself off from my emotions, I didn’t feel the emotional impact of the situation. But a few seconds later, I started crying.

I realized how stupid I had been. But this situation perfectly demonstrates autistic empathy, at least in my experience. It’s strangely polarized, which can be mistaken for a lack of empathy. But this is what happened:

Interestingly, although research from 2017 by Adam Smith shows our emotional empathy is intact and may even be elevated,[1]The Empathy Imbalance Hypothesis of Autism: A Theoretical Approach to Cognitive and Emotional Empathy in Autistic Development (Smith, 2017) I do seem to lack compassionate empathy at times. Compassionate empathy is the understanding of a person’s predicament (or indeed a fish’s predicament), feel with them, and be spontaneously moved to help if needed.[2]Three kinds of empathy: cognitive, emotional, and compassionate | Daniel Goleman The problem is that compassionate empathy is informed by affective and cognitive empathy, and my diminished cognitive empathy sometimes prevents me from getting all the information I need to correctly assess a situation.

Natalie said that although she is sad that Omega died, I shouldn’t beat myself up for what happened, as I killed my fish accidentally, with childlike innocence. But what bothers me is that whether it was an accident or there is sadistic intent, I still killed my pet. The intent or lack thereof made no difference to the fish.

I sporadically think about the way the fish sank and seemingly gasped for air. It’s an upsetting image, but it also makes me think. Of course, it wasn’t actually gasping for air, but again, I anthropomorphized its behavior and now realized that something was off.

By the way, I just noticed I referred to Omega as ‘it’ and ‘the fish’, which I think is a subconscious act of distancing myself from what happened, to diminish the hurt. I just searched this post to see where I said ‘he’ and where I said ‘it’, and I noticed that although I initially referred to Alpha as ‘him’ as well, I also started referring to him as ‘it’ when I started recounting what I did to him.

So there you go—I killed both my fish for different reasons; one out of affective and compassionate empathy, and the other accidentally due to my lack of cognitive empathy.

I thought I was good with animals. Our dog Pluto loves me, and I love him. But maybe keep your pets away from me after all, because with my kindness, somehow more animals could turn up dead!

Animals (2), Cognitive empathy (12), Compassionate empathy (3), Emotional/affective empathy (13), Empathy (19), Pets (2)
Click on one of the tags above to find related content