The Adult ADHD Self-Report Scale for DSM-5 (ASRS-5) is a self-report screening scale for attention deficit hyperactivity disorder (ADHD) in adults. It’s the updated version of the ASRS v1.1.

Who the test is designed for

The ASRS v1.1 has been translated into many languages. The most recent version, the ASRS-5, is available in:[1]Adult ADHD Self-Report Scales (ASRS) | National Comorbidity Survey

The ASRS-5 consists of 6 questions, giving you 5 choices for each question:

If you decide to take the test, please consider the Discussion section below.

The questions are scored as follows:

Although the ASRS-5 screener can effectively diagnose ADHD in adults, it cannot rule out other medical conditions that may impact the diagnosis of ADHD.

I love that this test is short. I find the options easily understood. The new ADHD screening scale is short, easily scored, and detects the vast majority of general population cases with high specificity.

As often happens, my mind goes to qualifiers on a few questions. Despite the simple wording, the qualifier conundrum makes them more challenging to answer. Being so brief a test, this didn’t pose the usual back and forth, second-guessing routine. The ASRS-5 is super-quick, simple to score, and for the most part, easily understood.

Last year I discovered I likely have ADHD, as ADHD medication has a positive effect on me. Actually, my assessor also suggested it to me when I got diagnosed with autism. I was hoping this test could verify whether indeed I have ADHD; but I scored 13, which is just below the threshold. I think that’s probably fair, as most of my behaviors are probably understood within the autism framework.

Still, I feel the ASRS-5 didn’t give me any clarity. Indeed the test is quick, easy, and I’m sure it’s accurate about what it measures. But considering it’s a short screening test, it will inevitably overlook many aspects of ADHD. For example, impulsivity and low frustration tolerance are not taken into account.

I also have some frustration around questions #4 and #6:

The ASRS-5 seems to be a good short screening tool. But for a comprehensive measure/assessment of ADHD, I would probably look elsewhere.

Below is an automated version of the ASRS-5. If you prefer a Word document that you can fill in, scroll down.

Below is a Word document that you can fill in. If you’re doing this test as part of Dr. Natalie Engelbrecht’s diagnostic process, do include your answers, as they’re more important for her consideration than the total score. 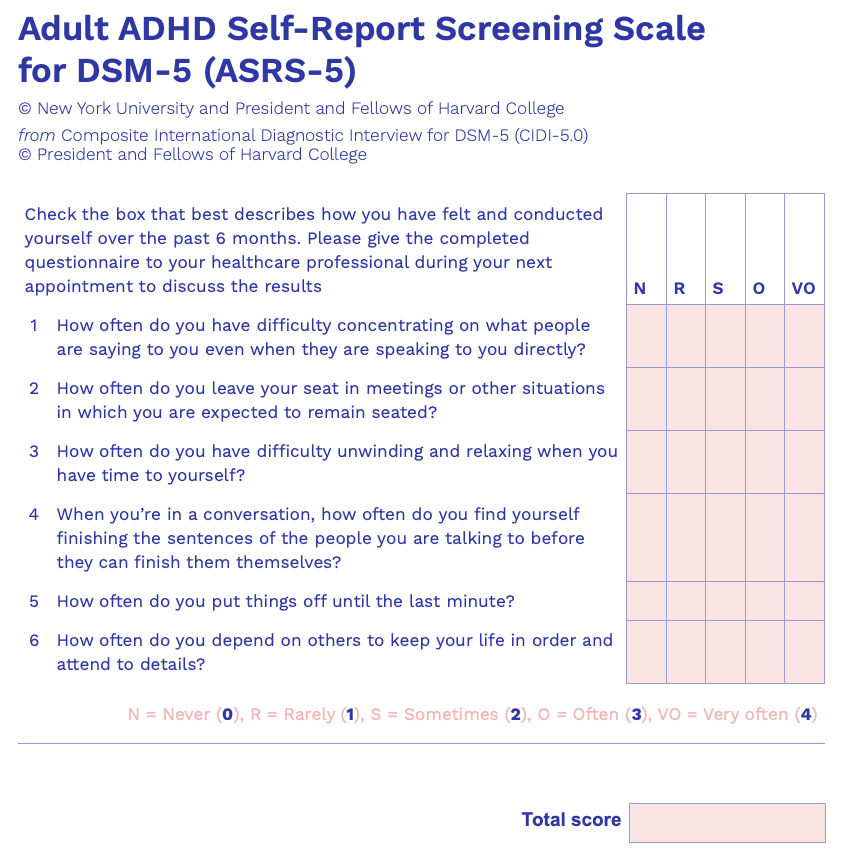 After the ASRS-5, consider taking one of the tests below.

Measures camouflaging, and can account
for lower scores on other autism tests

Online autism tests can play an essential role in the process of self-discovery, and may inform your decision to pursue a formal diagnosis. For a formal assessment, please see a knowledgeable medical professional trained in assessing autism.

If you are looking for an autism assessment,
Dr. Natalie Engelbrecht can offer help!
You can find more information here: